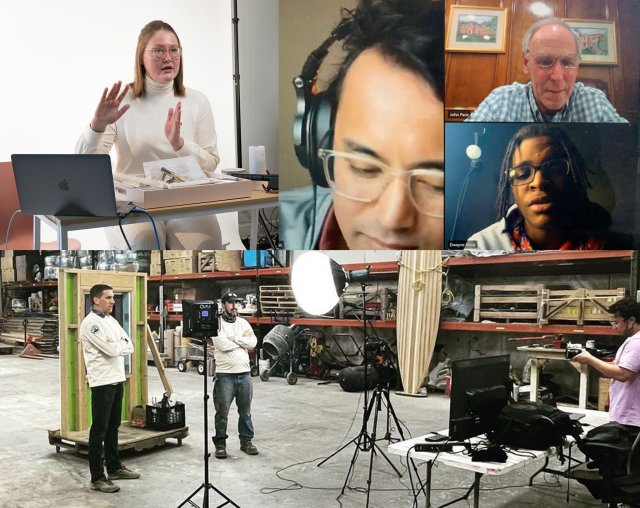 VERSATEX Building Products, long an advocate for education in the construction industry, is helping the Phelps public school transform the high school experience, she says, so “students can connect to the real world while in high school, and be prepared for the future.”

Making that connection is the innovative VERSATEX Scholars Program led by VERSATEX social media manager Bryan Abdallah. The program addresses a double challenge: As mature, skilled crafts workers retire or drop out of the industry, construction labor shortages have intensified. But openings go unfilled because few in the upcoming workforce view the building trades as viable career options.

In response, the program exposes Phelps students to real-life tradecraft and formative career perspectives. During the 2020 – 2021 school year, a pilot class of about 30 students elected to attend bi-monthly after-school webinars featuring livestream demonstrations by industry professionals. The students also interact with volunteer mentors whose expertise ranges from residential construction to interior design. This June, the program will divide a $10,000 VERSATEX scholarship fund among three highly motivated graduating seniors.

“We’re so excited about this partnership with VERSATEX,” says Phelps principal Dr. Joshua Emmett. “Our kids come from all over the city, and when they come here to Phelps, they’re preparing for the most powerful opportunity in the world: the power to choose. We want our kids to have options. So we’re preparing them for college—and career.”

According to Mr. Abdallah, “The Scholars Program is an offshoot of the VERSATEX Online Community, which brings together professionals in the building trades, design and architecture, as well as manufacturers of building products. They’re passionate about what they do, and eager to share what they know.”

While the Community’s reach is national, Mr. Abdallah chose Phelps as the pilot site because he’d built a face-to-face network of industry contacts in the D.C. area. Eventually, he hopes to open the program to any trade or high school that emphasizes architecture, construction, and engineering.

Mr. Abdallah had been exploring the idea of a high-school careers program for several years when he crossed paths with a Habitat for Humanity volunteer, Nick Burger, in 2019. Mr. Burger had discovered him through the VERSATEX Community podcast series, which Mr. Abdallah produces. Mr. Burger introduced him to the Phelps curriculum, in which Mr. Abdallah found a focal point for his vision.

He proposed a Phelps sponsorship to VERSATEX CEO John Pace, who went for the idea immediately. “At VERSATEX, we want to give something back—not just to the established industry, but to young people who can learn to make better decisions as they discover their passions,” Mr. Pace says.

“The Scholars Program is unique in the building-products industry,” adds Mr. Abdallah. “We can see it expanding nationally, to energize students in high schools or trade schools everywhere. It will expose students to on-the-job experiences, and help provide the guidance, motivation and emotional support they deserve.

“And, further, we hope it will elevate the appeal of careers, and even business ownership, in the indispensable trades that today attract nowhere near the number of young workers our communities urgently need.”